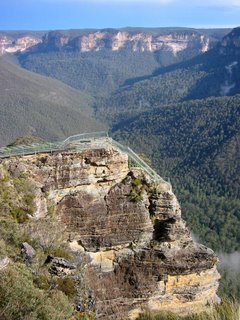 [Pic: Pulpit Rock - Friday's walk, Photographer unknown]
A 6.28 am wake-up call on Hat Hill Rd in the Blue Mountains. The word from my man on the ground in Sydney, was that the arrows were already green and we should get our arses down to the sea asap. By 6.33 am we were on the road, the wife still asleep in the back of the campervan. By 7.33 am I was trying to charm a local officer of the law to let me get on my way, and 'yes - I will observe the speed limits for the rest of my journey'. It was comedy in retrospect. The copper said he saw me "hooning" through Blaxland from the other side of the road. He turned round and pursued me and was expecting me to scream off at the next set of lights. But from the third lane to the right I had spotted Maccas so waited for all the cars to go before crossing three lanes to get our skim flat whites and bacon egg McMuffins. Then I saw the lights behind me flashing. "quick lie flat, hide under the covers". Fortunately I was ignored and my pyjama-ed wife leapt into the front seat instead and hastily belted up.
The confused copper enquired as to whether I'd been drinking. Last night had been an early one so the breathaliser reading was nil. I didn't mention the race for the wind and the fair reasonable honest copper let us on our merry way with a mere ticking off.
[Pic below of Cronulla beach, Photographer unknown] A military-esque mission saw me and Cuspy at Boat Harbour (the 4x4 access on the east of Cronulla Beach) while the wind was still up. We hedged our bets and set up the 12 Switchblade and 16 Crossbow. The only kite (9m) on the beach came in as Cuspy went out. We got chatting - that was a mistake - he told me about the 5 ft hammerhead he'd just been out in the water with. 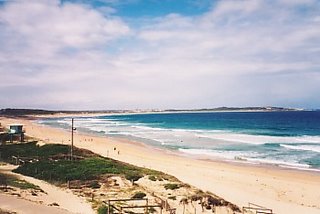 The brave boys that we are. We rationalised that there are sharks there all the time. Just because someone saw one shouldn't make it any more or less dangerous. So I took the helm and enjoyed some really great wind. What a fantastic day, we both got out 4 or 5 times. It was hard at first battling with the surf. We're more used to the flat waters of Botany Bay. The wide open ocean, the surf, the space, and of course the sharks, made today's session an invigorating and totally knackering experience. [Pic of Friendly-looking hammerhead. Any resemblance to Saturday's sharkie is purely coincidental, Photographer unknown] 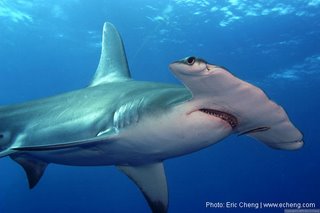 The wind came more up and down, more gusty. But we both showed good improvements, I had my best session ever, did the occasional decent upwind run, got used to bending my knees as I hurtled over the waves.
Of course kiting wouldn't be kiting without an incident to report. Today's was minor - in the midst of a beautiful run I had a small wipe-out in the shark feeding zone at the back of the surf. No problem, should be easy to get going again. But then the board got bashed around in the waves, swung around the front of me and made a bee-line for the harness and triggered the quick release. The kite fell out the sky and I was faced with a long, exhausting and daunting swim back to shore.
Like a man riding a horse and cart long after the advent of the motorcar, JK came with us to battle with his windsurf. The polesurfer wasn't faring well in today's inconsistent wind and surf. So I let him test-drive the Maclaren F1. It was exhilarating even for the bodydragging co-driver. I hung on the back and let JK throw the 12m around and to lift 150kg into the air.
All in all a top day at the beach.


A late entry for what was another great great great day. One where we all rediscovered the joys of this great sport.

It was Sunday March the 12th 2006, the three muskateers down in Kurnell:

Proto summed it up:

dudes, that was one awsome session yesterday...thanks for use of the kit...
Still high from the rush....bring on more wind.

We had an awesome day with Cuspy's 12m Switchblade. What a perfect kite that is.

Most of the afternoon messing around. Proto left early, realising he was still a recent father. Cuspy has still got a few weeks before he will be facing the same dilemma. Me & him messed around into dusk...

And on the day and the Switchy, from Cuspy's deaf ears:

awesome day in all though

FatChicken tried to get stuck in the nature reserve, made it with inches to spare....... 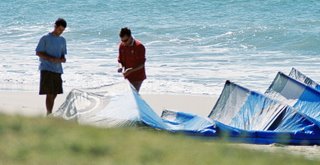 Saturday had been like last week - we got going early but by the time Cuspy & I had made the trip south, alas a beautiful calm had fallen over Sydney.
[Proto & Chaos setting up, Photo by KT]
We got a treat in the evening though, the eagerly anticipated premiere of the stupendous N,G&A feature film of the main event of February: the Dangar Island, Peat's 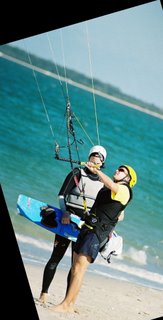 Bite wedding fest of me & my lovely new wife. A top production - even featuring some "early footage" of Capn Chaos in action. Thanks guys.

But what an amazing Sunday on the Bay.

The 5:58am text messages (early after the previous day's disappointment) said have a lie-in. I was full of flu so that was a blessing. But by 9ish, we were go. The arrows were lining themselves up for southwesterly. Me & the Proto legged it down to Brighton-le-Sands expecting to go to the Cap'n Cook bridge for the SW facing beach over there.

But the wind was 220 degrees, ie perfectly cross-shore on Brighton. And it was blowing. Weyhey. Proper bloody kitesurfing action. 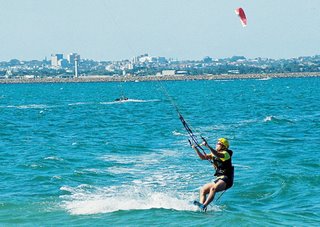 Wind a bit off & on, but plenty for us to get going with the 16 Crossbow. Now officially out of its bag. And a bargainous purchase it was too. $1,150 second hand off the other Bay, the 2006 model, a bit of use, nothing wrong with it. It's $2,300 RRP ($1,900 new with discounts). Takes a bit of getting used to, flying very differently to the 12 Boxer that I've "grown-up" on. Slower, less easy to throw around (due to the size), but so much more control. Flies itself enough to be able to start messing around on board control. Love it.

The missus came down with us. The last time she saw us being about a year ago, so she was expecting a day of tangled lines, kites falling out of the sky, no wind, disappointment, cup of tea in the van, and losing something-or-other. 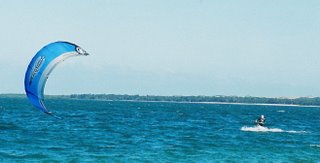 As it was she brought the camera, and it took pictures of me doing my magic upwind. Cuspy & Proto doing their magic too. She was mightily impressed!
[Cuspy just avoiding smashing the kite on the water, Photo by KT]


Proto had to go early and pack for his trip to the homeland. So he's gonna be out of action for 2mths. Probably worried he'll come back to find me doing jumps. And able to surf!?

But Cuspy was down so me & him continued til the wind dropped. Up, down, messing around, lots of upwind, down by the Novotel shark net. Amazing. The thrill of flying across the water. Some turns. Some board control.

A full day of beautiful kitesurfing.

[Me in front of the airport and city, Photo by KT]

Playing in the swell at boat harbour (Kitesurf Cronulla #25)


Winter's here for sure. Yesterday the southwesterly morning forecast told us to get our arses out of bed and get down to Boat Harbour (Cronulla) before breakfast. We fannied around and tried the small (south-facing) beach by the George's River Sailing Club (by the Captain Cook Bridge). Not a bad spot actually, for a southwesterly. But only if its actually blowing.

Before heading back to the City with our tails between our legs, me & Cuspy thought we'd check out the Boat Harbour, where there might be more knots, it not being sheltered by anything. I was slightly nervous about the swell. Especially seeing it as we drove down the dunes to the shore. But round to the right behind sheltered by the reef, it was bearable.

A surprising amount of wind though, considering how poor it had been inside Botany Bay. We tried the 12m Switchblade first. But too hard with the swell, and the surf, in what was light wind. So we moved up to the 16m Crossbow - now a whole two weeks since we bought it. It was hard work.

The two other's kiters out there - a couple?, and later on a bigger posse of kitedudes and dudettes - had moved on from 11m's to 16m's. And then decided there was more value on standing around than being in the water.

We struggled on. Met one of the guys who was friendly and had some helpful tips.

Of course decent wind and smooth waters are very forgiving of lacking talent. Today's conditions were not!