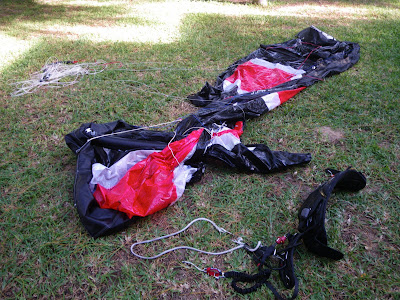 [Pic: Kite ripped in half and the chickenloop and bungee snapped]
Copied from my handwritten scrawls over coffee

This was one of those days you sort of gotta have but good to get over with and move on unscathed…
Lost a screw from a fin in the 1st session, came back and realised all screws everywhere were loose! Fortunately had some spares with me – one of the things I did prepare well – I brought loads of patches, a full kite repair kit, the 7m I bought I made sure was Slingshot for interchangeability etc – all coming in useful. Plus bike tool, penknife, Philips etc

Anyway later that day it all come into use after catastrophic failure on the Rev’s bar when the chickenloop snapped when I was out in the big waves. Normally not an issue, but here zere are windsurfers zipping all over ze place, I feared they would tangle in my lines. Even jore feared it when I realised they flagging line HAD ALSO SNAPPED! (I will be cc'ing the Slingshot dealer on this!). Pix below.

So now my fear is for a LOOSE kite bouncing around in the waves with these poledancers getting tangled in 25 of lines. Fortunately very quickly another kiter came by to check on me floating alone in the water, that i was free of te kite and to drage me to shore holding on to his harness. Surprisingly possible, though wrenching on the arms. Did I say bad things about Club Mistral yesterday? I take it all back with bells on. They have a rescue boat which just hangs around in te water waiting to rescue people. Witout an ado they nipped to the the kite, got it on board, lines unall - - then came to meet me where I'd been deposited nearer the shore. Totally matter of fact. I was the 6th they'd rescued today including one guy who'd got stuck 2.5km offshore, two lost boards, a lost other things I didn't understand (windsurf terminology), oh and an upturned boat (maybe the F-One fim crew?). I was their 6th 1,000 Rupees - that is if you want to get your equipment bacl! A fair exchange me thinks.

Well anyway, I was actually on my way ome, having spent a few hours in the excellent lagoon getting my skills back up - and had just stopped for a quick play in the waves. Now I had actually noticed the chickenloop looking a bit worn earlier. But not particularly bad, not enough to think it needed replacing, just enough to think how quickly they wear down.

The evening ahead will involve pissing aout canablising the bar from my 7m kite ...