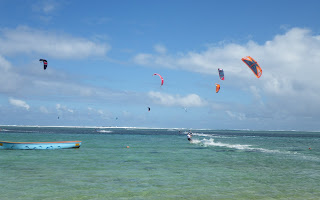 This is the Mauritius Kiteival - the 2nd time Nico Kux & Albert have held the event. It's part of the reason we came out to Mauritius for the 3 or 4 weeks we will be here ... this is the first day ...

Kited out from Tamassa hotel on a approx 10km downwinder to the lagoon at Le Morne. Cameron Dietrich, Cabrinha team-rider gives the thing some kudos. Safety boat followed us.

Beautiful flat shallow water out side the hotel, but a bit of coral - - I started feeling it in my legs fairly quickly – this being my 6th kiting day on the row after a break for a few months - - Started off just keeping with the crowd, then got into playing with toe side, and half way along I’d nailed right toe side which had always been problematic for me
Very exciting
Got lots and lots of jumps in – in fact I had to - - jumping was a good way to keep getting downwind – the whole downwinder concept is great and gives you time to play with moves

IDEA: –Run these in Sydney/NSW – charge people a fee for the transport and really for the boat support? Need to get a boat guy involved. That Green Island to Yorkey's Knob downwinder is still unfinished business. rich should be able to get a boatman to track us.

The big rock at Baie du Cap was where they had the cameras/video based to picture us – extremely choppy around there though. Some waves to play in too just a bit upwind of that spot.

Then got to the upwind part of the Le Morne lagoon – just divine – beautiful turquoise water with sand below, perfect for my playing with backloop transitions.

Revelation: POWER THE BLOODY KITE UP when doing tricks!! Makes a huge difference!! Obvious, I suppose.

The wind was perfect for the 11m all the way

Then lunch at the café at Les Pavilions – got on the back of a Ute to get there which added to the excitement – wind blowing through the hair along a bumpy coconut tree lined road makes you feel like your on a tropical holiday!

Day 1 afternoon – WAVES EXPRESSION SESSION
Nico orgniasd for a watchtower to be rigged up on the edge of the reef –Cameron, Nico , Brad and AN Other boated out to it – and raised a red flag – after an hour the flag was dropped.

In the meantime the aim was to strut our stuff in the wavers, or have fun, or generally fk about in my case. Eight of the group had a go – clearly some of the guys were really good, I was probably the weakest – but as I told myself – not as weak as the half of the group who didn’t try at all!

I was twintipped and just loving my kite mucking about in the big waves, jumping over the white water, ramping off smaller waves, and ramping off the swell - - big confidence building session

Retired back to base at 5ish – back upwind to the lagoon – that had been the best wind in the 6 days I've been kiting here
Made it to dinner early and to the bar with Cam – who was full of lots of tips of places to go that might fit into our vague schedule: Summary: Portugal & Sardinia for all round experience – people/kiting/food – seems like he'd had a poor experience in France, and loved Cornwall and its drinking – raves about Namoua(sp?) in Fiji and the other one beginning with T – private resort islands, great to kite – and of course Cabarete. Tarifa uncomfortably crowded and regulated. Has been on Odyssey (I’ve been contemplating that for a few years , and was emailing Gavin just a couple of months ago about joining up for 2010 – I think I need to get Jon to join me on it) – and totally rates it and Gavin. Knows Moe and Ben and knew of that New Cal trip I went on a few years back. Has links with some place in Peru/yoga resort/kiting which sounds great.