Perth1 - live to fight another day 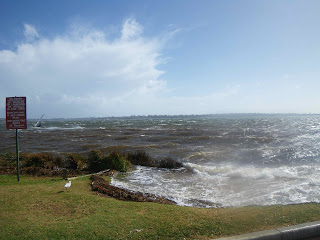 Great time staying with two sets of KT's friends - - I obsessed with the wind somewhat - - Perth has just gone into winter so its beautiful summer seabreezes are dead. but there was a storm coming thru while we were there. Paul let me take his car (thanks) so I ambled down to Woodies (Woodmans Point)

Two days watching chaos with large storms coming through, totally overpowered on my 7m Rev, didn't get on the water.... gusts were in the high 30s - - but BIG squalls coming thru regularly - - the "pros" were downing their kites and getting off the water

But great spot, big local scene here, awesome riders out there, some guy demoing a 2010 Airush, some good stuff form the curly haired guy on the 6m XBM

Etc... anyway, I was a total wimp - - if my wingman/partner in crime had been there I'm sure I'd've gone out. We'd've gone out. I spent two afternoons beating myself up. It all went wrong when I arrived with ONLY my 11m. It was gusty, but I thought "fk it" - - but then one dude wouldn't launch me - said he "wanted nothing to do with anyone putting up an 11 in this weather" - - blah blah "how long you been kiting for" all that put down stuff, I lost my bottle. Then went back for it asking this Irish newbie to launch me, but he'd overheard the previous coversation so followed suit. Clearly they were all in the right, I did convince myself of that evntually after lots of cursing under my breath. I was gonna sod-em and self-launch at one point. I'm still sure I would've survived. That's what the safety's for right!

I resurrected the situation by calling the guy who was advertising a 7m on seabreeze and managed to salvage an afternoon by making myself useful spending $700 on a 7m Rev - - pretty good value, only the tiniest scratch on the canopy that he'd repaired.

So Day 2 Perth i headed back to Woodies trying again. but the wind was even stronger, the 7 would've been god yesterday or even that morning. but the wind was mental. so I convinced myself again of the merits of "living to fight another day" - - not before launching the kite thoguh, and getting bounced down the beach. The others were having to tend to someone unable to land his kite so I was alone and had to pull the safety.... [ASIDE: 7m slingshot Rev, safety pulled, ie the red pin pops out easy ebnough, but the the chicken loop stayed in harness-hook as it was jammed so tightly - - I was calm and gave it a nudge, but strikes me as not being a failsafe system.

Did watch some chaos. Got some pics. Two blokes + chick turned up late despite hearing of everyone else's troubles they went out. Chick on 5m had to be brought back down straight away after launching despite being held at her back. Bloke1 came in with chaotic landing. Bloke2 ended up 2km down the beach with a very big swim. A shark had been seen at this spot yesterday do not good for a long swim!!!

View Kitesurfing spots - Alex on tour in a larger map